All-American Girls Professional Baseball League
1943 - 1954
The All-American Girls Professional Baseball League required the girls to attend Charm School after the games. Since there were many interviews🎥 and the news 📰 were always on the girls, the coaches wanted the women to look their best. They were taught the basics of etiquette and the proper ways of conduct in every aspect of their life. The girls weren't allowed to date✖️💑, leave their homes without makeup💄, smoke or drink, and had to always carry a purse around👛. Their hair always had to be brushed and was preferred to be cut short. The League controlled every aspect of their life, yet they were
being paid a lot of money for being participating in the league💰. Because of how influential the league was, Director Penny Marshall decided to make a movie called A League of Their Own based on the AAGPBL. The movie was very successful and many famous celebrities participated in the roles such as
Madonna and Rosie O'Donnell.
Link: http://historymatters.gmu.edu/d/6251/ 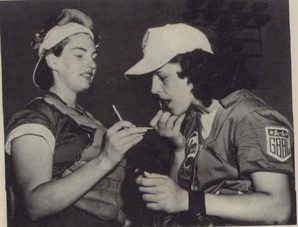